BWH painted our house. We live in a gated community with an HOA. They did a FABULOUS job. Hard to believe, they actually exceeded our expectations. My husband is super fussy and honestly thought he should do the job himself!! Well, BWH did our whole house, trim, decks, dock, everything. WOW!! Our neighbors who walk their dogs stop to tell us how great our house looks. We attended the most recent homeowners association and when I asked a question, the board said "she lives in the house with the beautiful new paint". Cant say enough BWH!! THANK YOU!!!!

BWH painted the exterior of our home last summer. They did a great job and did it quickly and in a very professional manner. The painters were courteous and careful throughout the process. I would highly recommend them to anyone.

"So far I have had a great experience. The interior paint is looks great!"

"Ben was great to work with. He and his team did a phenomenal job!"

"Ben was a pleasure to deal with from beginning to end! We had purchased a home and had the walls, ceiling, trim, doors and mantle painted in the entry way, kitchen, living rm, dining rm, hallway and main bath. His crew did an excellent job on patching the walls first, painting and clean up. The crew was professional and courteous and went above and beyond with a leak in the bathroom sink (That was not on the job list). Andy noticed the pipe under the sink was leaking and went out to his truck to get teflon tape to make the repair and advised us that that would help stop the leak but to replace the p trap. In this day and age it is hard to come by contractors that do the job they are hired for let alone go above and beyond…But that’s just what Ben’s crew did!! The house looks amazing and it was seamless, stress free and done on time! Ben communicates through the entire process and makes you feel like you are his only customer. We also had all the carpets cleaned and they look beautiful!
I will definitely be hiring Ben again for other projects and have already recommended him to friends and relatives. Buying a home and doing renovations can be very stressful and Ben made it completely stress free. Hire Ben and his crew and you will not be disappointed!!"

"BWH painted our house and trim this fall. They were very efficient, professional, did a great job, and were very thorough. When the color of our red door looked a little funky, the painters consulted is so that we could adjust the color and get it right. Ben was very thorough on the final walk through and it was obvious that quality work is their priority. We highly recommend them to anyone looking for painting services."

"Painted the exterior of the house. Paint crew did an excellent job, they were very profesional. Came in got the job done, cleaned up around the house each day. Ben was very easy to communicate with, stopped by the house multiple times during the project to make sure everything was to our satisfaction. Would use BWH Services for future projects."

"Ben and his crew were awesome.

I had some bank-mandated deadline issues, which Ben worked with. He also creatively problem solved issues around the temperature/weather. The guys couldn't have been nicer and the paint looks great !!! I'll be using BWH in the future for other houses and other projects."

"Ben Hamrick and his team did an outstanding job at our home. They did exterior work (4 sides brick) which included trim, front door, windows, replaced rotten wood on windows, etc, From pressure washing the house, walk and driveway, to the clean up, everything was done very professionally and in a timely manner. The week they were to start, the heat was almost unbearable and Ben thought that would delay things but it all worked out according to schedule. The crew was there by 7:00a.m. and worked consistently to finish. The most impressive thing was Ben and his team's attitude towards the work. Whatever additions were added, he obliged. His contract itemized everything in detail with nothing hidden. His quote won over 5 others. Not so much because of price (although reasonable and within range) but his personality had much to do with him getting the job. Would I recommend Ben Hamrick? Absolutely, without a doubt!"

"Ben and his crew very great! They repaired several areas on our house that had rotted wood and repainted the entire outside of our house. They also repainted our kitchen. It took a little longer than we thought it would, but the end results was worth it. Thanks BWH for a great job!

"Ben and his entire team at BWH were phenomenal from the first contact we made on Thumbtack until the exterior of our house was painted and approved by my wife and I. The work was amazing and Ben was very involved working with us on the colors to ensuring everything met our very high standards. He was always very responsive and easy to work with throughout the process. His crew who did the actual painting were professional, friendly, and experts in their craft. I would without a doubt recommend Ben and his team to anyone who has painting needs. He will be my first and only call from now on! Thanks Ben and the entire BWH team!"

"Overall, I am very satisfied with Ben Hamrick and BWH Services. My husband and I hired his company to paint the exterior of our Hardie Plank home.

He was prompt to return phone calls and on time for appointments. He provided a thorough quote and took the extra time to explain the benefits of using different grades of paint. He didn't try to upsell me on anything. He came across as honest, sincere, knowledgeable and experienced in his field.

I would recommend his painting services to friends and neighbors."

"They did an unbelievable job. They went above and beyond to complete our project within the time frame we needed and did not sacrifice one bit of quality. I would highly recommend this company to anyone who needs painting done. They do fantastic work at a fair price. You won't find better in the Charlotte area!!!"

"I normally paint my own home, but we purchased a condo that had a two story great room so I decided to check out painters. Throughout the process I was impressed with Ben's professionalism. He gave great advice during the estimate which was the reason I choose to go with his company. The estimate was reasonable and we even asked him if he could try to reach the lights to change the light bulbs which they did for no extra charge. He gave suggestions on paint colors he thought might work well with our space and we went with one of them and it came out great. Since it was such a large area to cover the color really had to be just right. They were able to start the job in two days and finished the whole condo in three days. He was very accommodating, meeting up with us twice to exchange the fob to get into the secure bldg. He really went beyond my expectations and the condo looks great. I would definitely recommend him!"

"Ben has been a pleasure to work with on this project and in discussing other projects around our house. Very upfront and honest about what can/can't be done, costs, effort, etc. His teams have been extremely professional and done excellent work. Definitely the polar opposite of all the nightmare contractor stories that likely scare people away from getting work done on their property. I would gladly recommend Ben to anyone, and plan on doing so within our neighborhood."

"Ben's team did an outstanding job painting 6 rooms in our house. Each member was always prompt, professional and very courteous. Ben stopped by daily to check on the progress and the quality of the job and this was all done at a very reasonable price. If we ever needed any more painting jobs done, we'd for sure call BWH Services."

"Ben's group did a great job. Good pricing, finished on time, and even came back to fix a few minor details. Overall very good."

"I am so Happy!!!! Ben and his workers are a pleasure to deal with. They are professional, detailed oriented, and nice. I originally had a terrible experience with another contractor, however Ben saved the day and now I have the nicest house on the block:)"

Timeline of work to be done:Description of work:Process:
From our perspective:
Ben saw a need - we were without painters and were moving in a week's time - and while he knew it would be pushing it to get the work done, he had faith in his crew(s) that they could do it and they did. Ben is a stand up guy, very polite and engaging. It's doesn't seem to be just business with him, but about building relationships to help meet customers needs for now and for the future.

THANK YOU, Ben and BWH Services, for providing OUTSTANDING quality work at a very reasonable and fair price. We appreciate all that you did to help make our move a little less stressful.

Ben and the BWH crew were absolutely fabulous. Not only did they do a great job on their work, but they were a delight to work with. Very friendly, informative, honest, and trustworthy and finished our entire house in under a week! Without a doubt would hire again for all of our painting needs! 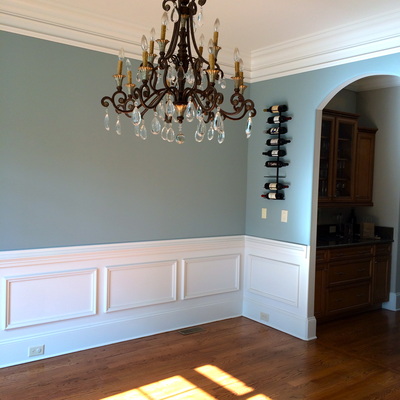 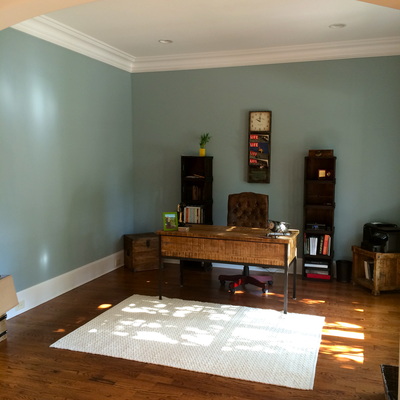 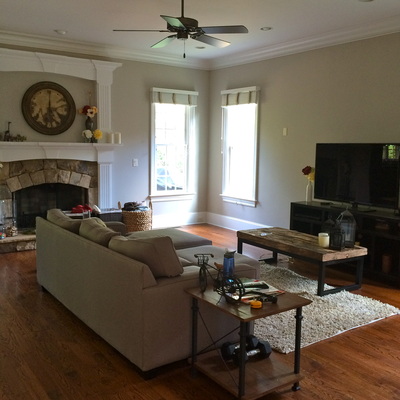 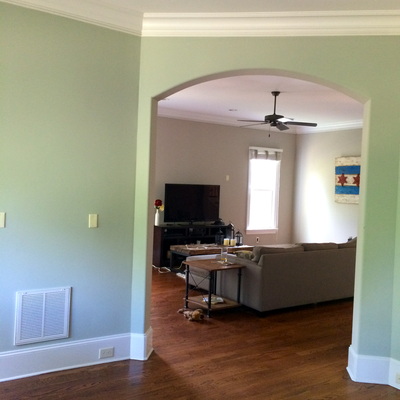 Ben and his crew were absolutely terrific! Extremely knowledgeable and professional from start to finish! I will use only BWH Services in the future. SS

I obtained quotes from several painting companies in the Charlotte area, and ultimately decided to use BWH Services due to Ben Hamrick’s professionalism, the company’s reasonable pricing, and seeing their paint work that had been done in another person’s home. I hired BWH Services to paint all of the interior walls in my new construction home, and my experience was great. The job took approximately 4 days. The crew was polite, and covered our brand new flooring very well and cleaned up after themselves when the job was done. My only request at the final walkthrough was for an additional coat of paint on a very dark color that we chose to use in one room, which Ben took care of immediately on that same day. Our home looks beautiful with freshly painted walls and I would definitely use BWH Services again and recommend them to friends and family. Thanks, Ben!

My husband and I recently closed on our first home and needed to have 75% of the interior space repainted. I met with numerous painters, but Ben was the contractor that we selected. He is dependable, trustworthy and does great work. His team is friendly and will work long hours to get the job done. We highly recommend his services.